When was the pen invented? That question can only be answered by first defining the word pen. If we only think about a pen as an instrument used for making marks on another surface, we must consider that the pen as being invented during the stone age. Cave drawings were achieved by using a tool dipped in pigment to leave a mark on stone walls. Throughout history reeds, feathers, sharpened sticks and bones were used to leave marks on various surfaces, but they were not pens.

Writing instruments evolved throughout time and through civilizations. The stone age, iron age, the Egyptian, Roman and Persian Empires all had a means to leave documented writings and drawings. They were not using pens. They used any instrument that could be dipped in a liquid and applied to another surface to dry and leave a mark, drawing, or words. It is the forerunner of the pen, but not a pen. The pigments and paints used by ancient civilizations provided the foundation for ink as we know it today.

It can be argued that the Egyptian Reed was a pen, that the Roman Stylus was a pen, and that the Persian Feather was a pen. This is all true if we consider a pen as an instrument used to transfer pigment to a surface for communicating through pictures or words. The history of civilizations was written by making use of dyes, pigments and charcoal and applying them to walls, pottery, stone tablets, and wax. Ink and the means to use it to leave an indelible mark can be seen in every period of human history. In the ruins of Pompeii, a copper rib that was some form of writing instrument was found. 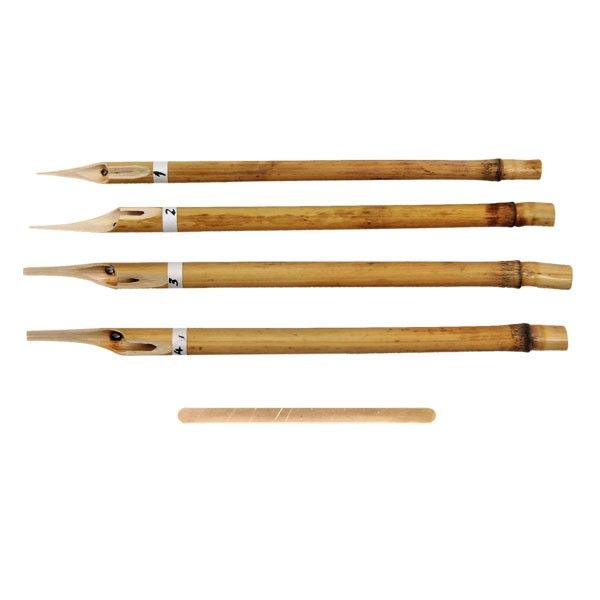 The Evolution of Pens in History

Over the centuries writing instruments have evolved into the pen as we know it. Today’s definition of a pen is ‘an instrument for writing or drawing with ink, typically consisting of a metal nib or ball, or a nylon tip, fitted into a metal or plastic holder’. If we consider a strict definition of the word pen, we must consider the Egyptian model used by the Arab Fatimid from 953-975 as the basis for today’s custom pens. The ruler demanded a writing instrument that would prevent him from getting the dyes and inks all over his hands and clothes when writing. His inventors provided him with a custom pen that had a reservoir that fed the nib, preventing the constant need for dipping.

Quill pens with an ink well soon became the norm for writing, lasting for centuries. Quill pens were used for artwork design, historical record keeping and daily correspondences. The Quill pen can be looked upon as the first customised pen. Feathers of various bird species provided fine tip points, wide points and every size in between allowing for art work design, fancy script and bold letters. The monks of the middle ages who painstakingly transcribed the bible had a collection of custom pens in the form of numerous sizes of feathers featuring tips from fine point to wide point.

An early reference of a metal custom pen containing ink, is first seen in the diary of Samuel Pepy in 1663, when he mentions a custom pen made of silver to carry ink. In 1792, The Times newspaper ran an ad for a ‘newly invented metal tip pen’, advertising pens with ivory handles and a rustproof tip. The ad implies that metal pens have been in use for years and the improvement offered by this advertised pen is that the metal tip is treated and will not rust.

In May of 1827, France issued its first patent on the fountain pen to a Parisian Student, Romanian Petrache Poenaru. The fountain pen which features a fine stainless-steel tip, still needs an ink well to be constantly filled with ink. Widespread production of these customised pens taking another 30 years, with others improving on the filling techniques. Fountain pens become a favourite with professionals such as barristers, professors, doctors and accountants and remain a mainstay for over a century. The pitfall of the fountain pen was its penchant for leaking onto documents at the most inopportune time.

The evolution in the fountain pen comes all revolve around the filling process and preventing leaking. The button filler, the lever filler, the click filler and the matchstick filler were all innovations of the filling process. The steel nibs of the fountain pens would quickly corrode, leading to the introduction of the gold nib. Many professionals would have their pens customized by engraving their initials onto their gold nib fountain pens. Bankers and other professionals began to have their names or company logos printed on their pens. These custom pens were a status symbol to the professional. Custom artwork design was applied to the fancier fountain pens adding to the prestigious nature of owning a fountain pen. 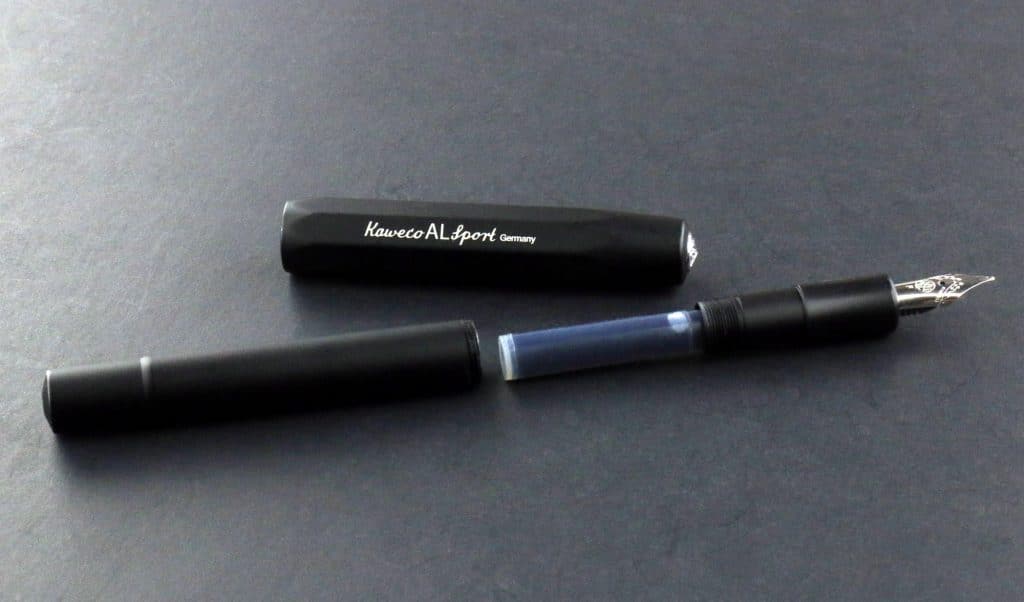 If you’re interested to know more about the different types of fountain pens and how to fill them, watch the video below:

The surge in the popularity of the cartridge pen saw an advertising opportunity arise for businesses, both large and small. Businesses began to have their company logo, artwork design and slogans printed on pens and giving them out as promotional items that they knew people would keep and use every day. The businesses saw these custom pens as an effective advertising medium.

Originally the concept of the ballpoint pen was proposed by John J. Loud, who was looking for a way to write on surfaces other than paper. The fountain pen, with its delicate tip was not up to the challenge of writing on wood, coarse paper or surfaces other than writing paper. The concept was simple enough, a thin tube of ink would be placed in a comfortable cylinder, the ink would be held in a metal ball in a socket. When the ball was pressed against a writing surface, the ball would rotate in the socket allowing a smooth even flow of ink. Mr. Loud receive his first patent for the ball point pen on October 30, 1888.

Since 1888, numerous patents were filed to perfect the ballpoint pen. Patents concerning the type of ink, the rotating mechanisms, the ball, the cylinders were all filed, each one making the ballpoint pen the perfect writing instrument that we know today. Ballpoint pens were made retractable, so that with the click of a button, the tip of the pen would disappear into the cylinder, preventing ink stains on pockets. 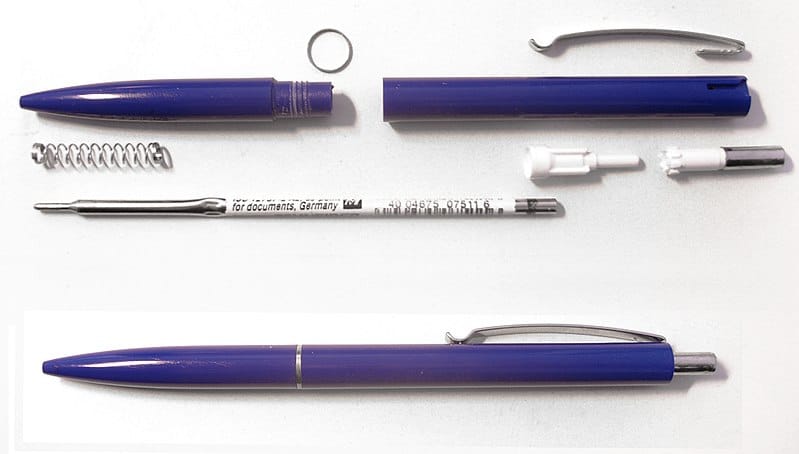 Each innovation made the ballpoint better and cheaper to manufacturer. Ballpoint pens soon became available in every colour, style, shape and design. They featured permanent ink, erasable ink, black ink, blue ink, red ink. It was the revolution of the pen. High end custom silver-plated ballpoint pens were made for executives, soon to be replaced with solid gold ballpoint pens. Customized pens with engraved names, initials, and dates were given as gifts by the mid 1950’s. The custom pen was a status symbol with office workers, professionals, secretaries and executives.

For everyday use, mass manufactured ball point pens consistently got cheaper as processes were improved. Advertising pens were introduced as early as 1915 in New York City. Companies would print on pens adding a logo, custom artwork, even birthday wishes onto ballpoint pens. Soon banks, lawyers’, doctors and businesses were giving away ballpoint pens with a company logo, custom artwork design, and phone numbers printed on the pen. The cost of putting your business name, slogan and contact information in the hands of clients and potential customers using pens was the most effective way to advertise. To this day, the cost of advertising on a plastic pen (link to plastic pens) offers companies the most effective, cost efficient way to advertise their service by giving away a product that people love to receive and use every day.

Presidents, Kings and Prime Ministers give away printed pens at State functions, signing ceremonies and as gifts to foreign dignitaries. The ballpoint pen is taken for granted today, even in the age of computers and printers, everyone uses a pen.

Many other promotional suppliers display prices without the extra add-on costs:

All your costs upfront!
All-inclusive per unit pricing including Setup, Printing, Freight & GST.

Top Notch Customer Service!  Have any questions? Need some advice? In a bit of pickle? Our friendly staff will be there to assist you through the whole process.

Sign up to our newsletter for updates and special offers!

Tell us what you're looking for: